I live in western Washington, and yesterday we had a storm. We tend to get them from time to time. Within the last four years of moving back home (to Washington) we've had two bad ones.

The first winter after I moved home an awful snow storm blew in. We lived in the country at the time, and used well water, electric heat, and an electric cooking stove. The snow weighed down the branches so badly that the trees broke from the pressure, bringing electrical lines down with them. A forest lived behind my backyard and the air was so incredibly still and quiet without the sounds of electrical items. I'd stand outside and listen to trees groaning and cracking from the weight of snow and ice. For days I had no running water, no heat, and no cooking stove.

I no longer live in the country. I now live near the water. Yesterday's storm brought wind and rain. It brought down trees, took out power, broke windows, removed roof shingles, tore down fences and even some homes. It sounded as though a giant sat on my roof, pounding its fists and tearing off the shingles one-by-one.

But today, just like after the snow storm, I regroup, assess the damage, and begin the repairs.

Mother's Nature's storms remind me a lot of life's storms. Oftentimes without warning a tragedy, or illness, or personal turmoil will roll in. If you're like me, your first response is to run outside and try to brace those things that seem likely to fall down first. You see the dark clouds coming and you try to make yourself believe the damage will be minimal, nothing bad will happen if you can just __________.

But then the storm hits you. It stirs up your life and there's nothing you can do but batten down the hatches and wait it out. You hear scary things. You feel scary things. And every minute creeps by like an hour at the DMV.

Eventually, though, the storm passes. You peek your head out from under your security blanket to assess the damage. Yeah, there's damage. Your personal storm may have cost you a friend or two, a significant other, a job, a familial relationship. It's hurt your pride, your patience, your self-esteem.

But it's time to regroup. Maybe apologies need to be given or received. Maybe broken relationships need to be cleared away so that new relationships can be built. A new foundation of hope must be poured. New seeds planted to eventually take root. New boundaries posted.

Yes, the storm brings changes--some good, some not so good. But in time, those new additions and adjustments and foundations won't be so new anymore. They'll be the same ol' same ol' and with any luck, your storm will be just another "That one time..." story you'll tell your friends over a second glass of wine.

THE YEAR I READ MY BOOK to 4th GRADERS

Earlier this year I began volunteering in my 4th grade daughter's class. I've helped out before, but this time I came with an agenda. My daughter's teacher had asked me to visit every Friday to teach the kids how to write and to offer creative inspiration. And during my visits I could read a little of my middle grade novel, THE CURSE of the MUMMY PRINCESS. A chapter a week.

That's how it started.

During my first visit, as I sat down in front of a classroom full of kids to read my manuscript, I freaked out inside. And apparently outside too, because a girl in the front row pointed out to the rest of the class that I had a dark red rash growing up my neck.

With a shaky voice and a red, blotchy neck, I read the first chapter of my story...out loud...to kids.

And they loved it.

I was no longer asked to spend my time teaching writing, but to read as much as possible of my manuscript before the bell rang.

Over the top of my purple Kindle I'd see the teacher pause from grading papers to sit and listen. And my heart would quicken.

The kids started drawing pictures of the characters and scenes from the story. And with great detail. They caught the part that explained the gold in Aziza's braids. And the part that showed Aziza's dark skin and her servant Halima's lighter skin tone. They caught everything!

Some days, if I finished before the bell rang, the teacher would excitedly pull up pictures of ancient Egypt for the class to see and I'd tell the kids little historical tidbits that weren't included in the story. Two weeks ago, the teacher explained to the class that my manuscript challenged some ways of thinking, which led into a great class discussion on gender roles and religious freedom. (Yes, my daughter's teacher is AMAZING.)

Not only did the kids (and an adult) enjoy my story, but it inspired important conversations.

And you know what else? While some would call it a "girl book" because the main character is female, the boys liked it just as much. Today one of the boys told me his favorite character is Isis because she's tough and strong.

Today I finished telling the story. My heart sped as I read those last few pages, hoping the ending didn't disappoint the children listening and picturing the action unfold in their heads. When I said "The End" I received applause from twenty-something sets of hands. And my neck probably still got red and blotchy, but for a completely different reason than before.

I wouldn't have experienced any of these things if I hadn't read my manuscript to a big group of kids. A big group of amazing, intelligent, imaginative, deep-thinking kids.

I'm not saying you need to run out and read your manuscript to an elementary school class. I am saying, though, it's an incredible experience.

Playing with Images and Worlds

I wrote a contemporary sci-fi romance. It has dual POVs, with one POV taking place on our world and the other taking place on another world; a seemingly perfect world. In the story those of the perfect world saw that we needed a little help and because everything is connected they opted to help us out. They call themselves Watchers. We call them our conscience.

When I was developing this story world, I wrote a Watcher's Poem, though it's more like a creed. Today I played with it a bit and here's how it turned out. :) 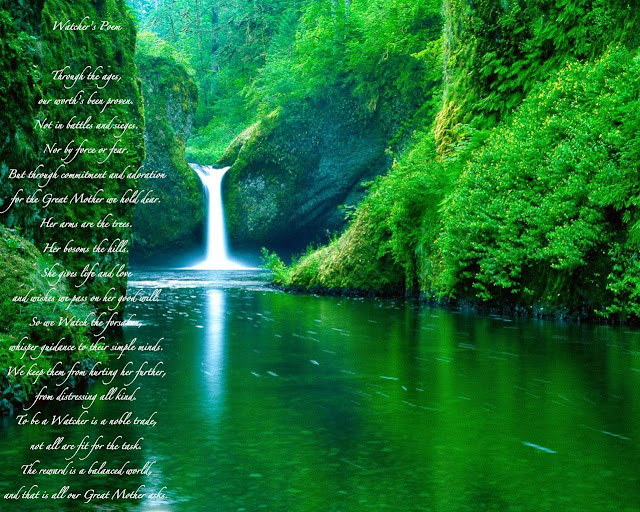 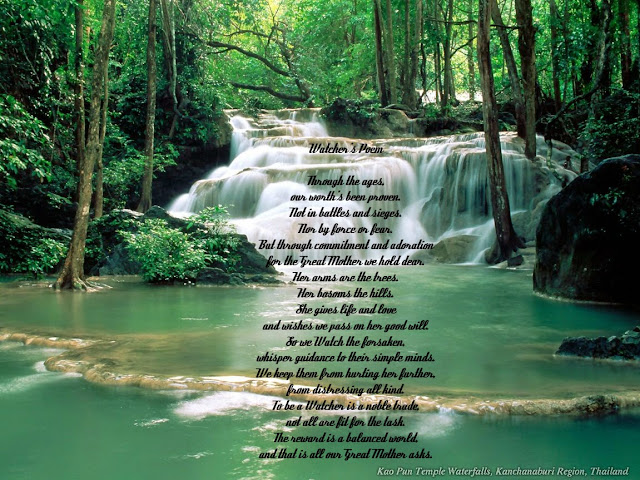