In May I sent my full manuscript to an agent who had requested it. In August she responded with a very sweet and helpful email. She told me that she liked the story; it was well-plotted and entertaining. The problem, and her decision to decline representing it came from the fact that that characters lacked depth. She said they felt emotionally distant. She was right.

Thankfully, at the end of her email she mentioned that she'd be happy to take another look at my work at some point. Now, from what other authors have told me, the fact that an agent didn't send me a form rejection letter was a big deal; the fact that she told me what needed to be changed was an even bigger deal, and the fact that she offered to take a look at it in the future was a huge deal! I didn't view her response as a rejection (well, lets be honest, I did until two published authors educated me on the matter). I saw her response as a push to do better. Maybe even a test to see if I was the type of author who would recoil in anger and mutter to myself of how great my writing was and that no one understood. Maybe she wanted to know if I'd take her advice under consideration and work on fixing the issues she found. Either way, I listened to her as well as the published authors.

In October I emailed her to let her know how thankful I was to her positive and helpful response and then I asked her a simple question. I wondered if she'd prefer that I query her again once the rewrite was complete, or just shoot her an email letting her know. Again, she responded. The answer? Email her when I completed it.

Yesterday, I sent that email. Today I wait.

Have you had any sort of correspondence with a literary agent? If so, how did it go? If not, what are your aspirations/ fears when it comes to literary agents?
Posted by Rachel at 11:27 AM 3 comments: 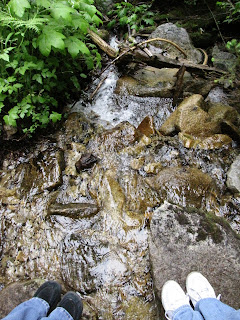 I adore the blessing of close friends. I love how once-in-a-while (in some cases once-in-a-lifetime) a super special person takes a genuine interest in who you are and loves you for what they see -the bad and the good.

Over the course of years your two paths intertwine and although you live very separate lives, you feel like you're climbing the same mountain together. You encourage each other to push on -to focus on the leafy, vibrant greenery rather than the sharp, menacing rocks.

When you're tired and need a break your dear friend accompanies you to the nearest waterfall where the two of you stand at the edge and look down to see where you both began while marveling at how far you've come together. She shows you a different view -from up top, the rocks are smoothed by the water of time, and now you can appreciate how the brown and gray stones make the bushes that much greener.

Of course, you both know soon it'll be time to leave the waterfall and continue your journey up the mountain, but it's during those waterfall breaks together when you can truly fall in love with the climb.

Why this love song to friendship? I guess I'm standing at the edge of a waterfall right now with my best friend and wondering how I got so lucky.
Posted by Rachel at 4:21 PM 2 comments: