I wrote a story called Freyja's Daughter that follows a huldra, Faline, as she tries to reestablish a disbanded secret society of folkloric women in an attempt to fight the big bad who's been oppressing them for generations. Of course each type of folkloric creature hates the others, so such a task is dangerous and nearly hopeless as her oppressors are always hot on her trail.

One group Faline must persuade are the succubae. Now, every one of my beta readers has a favorite group, and I love each group for their unique sub-culture and abilities, but you guys...the succubae were so much fun to write. Especially their leader, Marie. 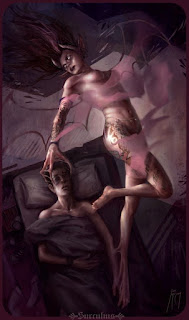 According to myth, a succubus is a demonic female creature that is most often said to lure unsuspecting and innocent men into sexual relations. Sometimes this happens within the men's dreams. Sometimes, within their room. Always, they were "forced" by the succubus.

(I'd like to add here that many of our well-known myths have a patriarchal bent to them. It is my goal, within my writing, to take those myths and iron that patriarchal shit out.)

So in Freyja's Daughter, the succubae are not demons--they've just been given a bad stigma because they're powerful women. And no, they don't force anyone to have sex with them. There's more pleasure in the willing.

The succubae in Freyja's Daughter can control and manipulate energy.

Because I plan to continue writing in this Wild Women world in the form a series, I also plan to delve deeper into each group's sub-culture. The next book in the series will shine a spotlight on the succubae group. And last week I attended an energy-healing class as part of my research.

There's lots of different types of classes that teach energy work, but one I've been hearing a lot about lately is called reiki. Even my massage therapist swears by it. So I signed up and went in with an open mind.

As part of the class materials I was given a laminated chakra chart and a book called The Reiki Manual: A Training Guide for Reiki Students, Practitioners, and Masters by Penelope Quest. According to this manual, reiki is a holistic healing method using energy. The practitioner uses life force or universal energy to clear energy blockages in their clients. From the manual: "Reiki (pronounced RAY KEE) is a Japanese word which is most often translated as 'universal life-force energy."

I love researching and experiencing new things, so I really enjoyed this class. I got to experience what it feels like to get a reiki treatment, which was highly relaxing. (I'll definitely use that sensation in my next Wild Women book.) The instructor said many of her clients fall asleep during their reiki treatments and I could definitely see why. And the explanation of reiki energy, its history, and how it's used gave me some story fodder. Personally, I don't plan on becoming a reiki practitioner or anything like that. But it was a fun class and the concepts introduced gave me lots to chew on and certainly more than a couple ideas for use in future stories.

What's up next for me in the name of story research? Well, I'm planning a trip to Oregon to visit the Portland underground, which I'll use in the second Wild Women book. :)